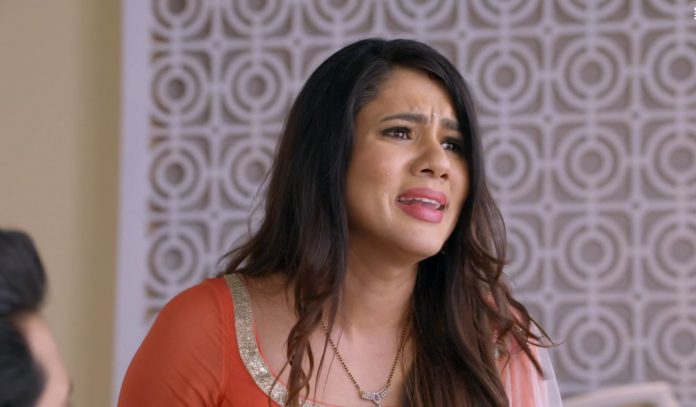 Kundali Bhagya Kareena shocks Preeta 4 March 2021 Update Rishabh surprises Kritika. She gets too happy to meet him. He tells that he is back for her sake. She missed him a lot. He tells her that he missed her too, but he isn’t happy at all. Prithvi is shocked to see Rishabh back. Sherlyn is shocked as well, since Rishabh didn’t inform her about his return. Rishabh tells Kritika that Prithvi isn’t a right guy for him. She knows that Karan has told it to Rishabh. She wants Rishabh to understand that Prithvi is the best guy for her.

Prithvi feels Rishabh can become a big hurdle for her. Sherlyn knows that problems will increase for them now. She tells Prithvi that she didn’t know that Rishabh is coming. Prithvi tells that Rishabh will ruin their plans if he succeeds to change Kritika’s mind. Rishabh tells Kritika that they love her a lot, her happiness is important for them. He wants Kritika to trust him and break the marriage with Prithvi.

He tells that he would support her if she is marrying a nice guy. She tells him that she got her happiness after a long time, everybody is against her marriage. He tells that he is her brother, he wants her betterment. She tells that Preeta didn’t like Akshay and broke the marriage. Rishabh tells that he completely believes Preeta, maybe Akshay was really bad that she took that step. Karan asks Kritika to talk about Prithvi.

Rishabh asks Kritika to vent her anger, instead taking the wrong decision. Kritika tells Rishabh that Prithvi saved her life and dignity in the village when she fell into trouble. Sameer tells that Prithvi is a dangerous man. She tells that she knows just good about Prithvi. She asks the reason for breaking the marriage. Sameer wants her to understand that they are against Prithvi for a reason. She is determined to marry Prithvi. She wants them to not stop her this time. She threatens of committing suicide if they come in her way. Rishabh tells that he would slap her if she dares to say that again.

Kritika is actually fed up explaining them that she loves Prithvi and has married him already. She wants them to bless her. Sameer asks will she marry anyone who saves her. She sings Prithvi’s praise. Kritika tells that she wants to move on with Prithvi. She asks them to get a proof against Prithvi, then she will be breaking the marriage. Rishabh consoles her. Prithvi tells that Kritika will fight the family for his sake. He reveals to Sherlyn that he paid money to the goons to tease Kritika and won Kritika’s heart. He tells that he is really liking the drama.

Sherlyn realizes that Prithvi has married Kritika by a full planning. Rishabh tells Kritika that he will do the needful. Kareena and Rakhi meet Rishabh. They find him coming home at the right time. Karan is still against the marriage. Kareena knows that Preeta is triggering Karan. Rishabh and Karan meet Aroras. Sarla is surprised to see Rishabh back. Shrishti tells that she is very happy that he is back. He tells that he had to come for the family.

Karan tells them that Rishabh has failed to break the marriage. Rishabh tells Karan that he isn’t saying Prithvi is right, but they have to get a proof against Prithvi to show his truth to Kritika. He regrets that they can’t convince Kritika. He tells that Prithvi has saved Kritika and got her home. He doesn’t want the marriage to happen, but he just sees her happiness. Karan acts kiddish.

Sarla tells Preeta that Rishabh is right, the fact that Kritika is alive, safe and happy because of Prithvi. She asks Preeta and Shrishti not to go against Kritika’s wish, else she may really take a step like suicide. She wants Preeta to stay out of this matter and not risk her own marriage. Preeta gives her word that she won’t do anything this time. Sarla makes her promise.

Reviewed Rating for Kundali Bhagya 4 March Update Kritika threatens Rishabh: 1/5 This rating is solely based on the opinion of the writer. You may post your own take on the show in the comment section below.