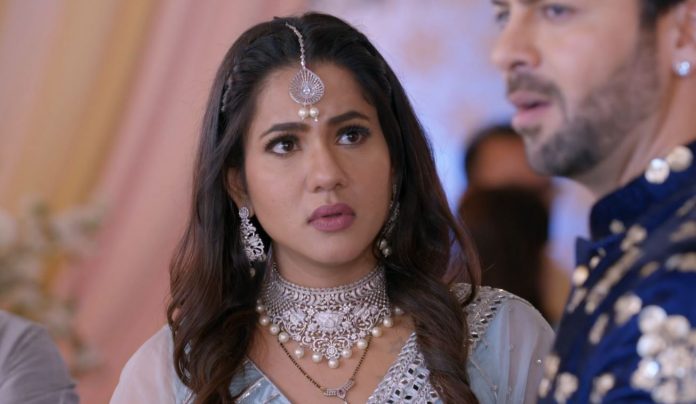 Kundali Bhagya 15th March 2021 Written Update Kritika meets truth Preeta tells Shrishti that Prithvi would be taking revenge on them, that Karan has taken his place in the mandap. She adds that there is no reason than revenge that Prithvi is marrying Kritika now. Shrishti tells that she feels that the revenge has some old reason, he has a revenge with Luthra family member. Rishabh and Karan share some good time. Rishabh loves his brother a lot and pampers him. Karan is glad that Rishabh is like Mahesh for him. Karan tells him that they will party at night since the engagement is going to break. Rishabh wishes the same.

Kritika asks Prithvi to keep his phone. She wants to apply the mehendi. Prithvi asks her to get it done later, since there is no time for the mahurat. Parminder asks about Preeta and Sherlyn. Bani tells that both the Bahus would be in kitchen. She asks pandit not to miss the mahurat. Bani happily conducts the rituals, while Preeta is confused about Prithvi. Preeta wants to know why did Shrishti feel so. Preeta gets a call from Karan.

He wants her to come and attend the engagement. She tells Shrishti that she has to go and stop the engagement. Sherlyn overhears Preeta’s statement. She calls up Prithvi to inform him about the new threat. Sherlyn asks him to get the engagement done soon, else Preeti will reach him with the evidence. Prithvi asks her to control Preeta herself. He tells that he can’t go anywhere at this time. Sameer tells Shrishti that nobody can stop them. Shrishti tells that they shall win once Preeta shows the truth to the family.

Sherlyn tells Mahira that Preeta has a big proof against Prithvi. She fails to stop Preeta. Mahira tries to save Sherlyn from falling under suspicion. Shrishti finds Sherlyn going to faint Preeta by hitting her. Shrishti does the same with Sherlyn. She hits the same vase on Sherlyn’s head and faints her to leave her in the room. She ties her up. Sherlyn calls for help. Mahira gets to hear Shrishti and Sherlyn’s confrontation.

Shrishti tells that she knows the truth of Sherlyn and Prithvi’s marriage. She adds that she has an evidence against her. She tells that Preeta is going to bring the proof in front of the family. Sherlyn gets tensed. Kareena doubts Prithvi when he rushes with the engagement. Preeta can’t see Prithvi ruining Kritika’s life. Prithvi thinks he has ruined Luthras by entering their house. She succeeds to reach there before the engagement ritual completes. Preeta stops the engagement in time. Karan believes that Preeta will not let the engagement happen.

Kritika doesn’t want Preeta to threaten her happiness again. Preeta asks Kareena to come with her to know about Prithvi’s truth. She takes Kareena with her. Shrishti tells Sherlyn that she will tell the truth to everyone, it will be fun to unmask them. Shrishti tells that Sherlyn’s story will end, she will no longer be a part of Luthra family. Mahira hides from Shrishti. She reaches Sherlyn to help her out. Sherlyn calls Prithvi to tell her about the proof of their marriage. Prithvi doesn’t answer.

Rakhi can’t believe that Kareena went with Preeta by leaving her daughter’s engagement. Prithvi hopes that Kareena doesn’t trust Preeta. Kritika asks him not to be tensed. She tells that she will marry him, she will not break the marriage. She adds that Preeta can’t break their relation, Kareena will never listen to Preeta. Suresh apologizes to Prithvi on the family’s behalf. Prithvi lies that he is too lucky to get Kritika. Suresh feels Kritika is lucky to get a nice person like Prithvi. Sherlyn tries hard to inform Prithvi. He comes up with lies to trick Kritika. Kritika finds Sherlyn and Prithvi hugging. Prithvi tells Sherlyn that he is going to get exposed, nobody can save him now. He gets scared. Prithvi gets caught by Kritika. Kritika learns his truth. What should Kritika do now? Comment below and keep reading.

Reviewed Rating for Kundali Bhagya 15th March 2021 Written Update Kritika meets truth: 3/5 This rating is solely based on the opinion of the writer. You may post your own take on the show in the comment section below.