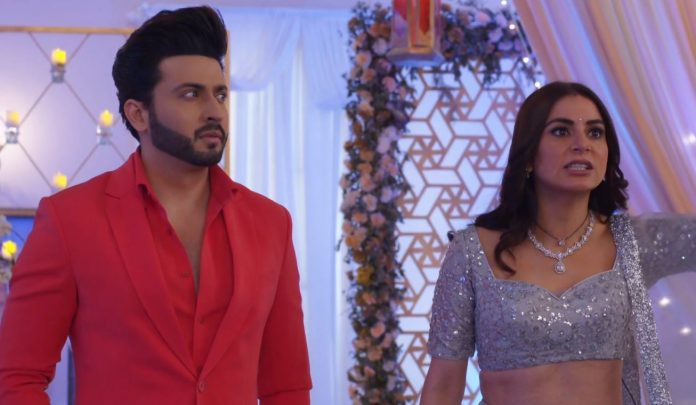 Preeta tells that Shrishti has found evidences against Prithvi by visiting her house. She asks Kareena to check the evidence once, since its about Kritika’s life. Kareena is shocked to see Prithvi’s wedding pictures. She tells Preeta that Prithvi is already married, he is cheating them. Prithvi is panicking and finds a way to run. Sherlyn meets him and informs him that Preeta has a proof of their marriage. She tells that she isn’t joking.

She tells Prithvi that Preeta has taken the proof to Kareena, their truth will be out soon. Prithvi tells that they are finished then, nobody can save them from getting exposed, they have lost and will be ousted from the house. Sherlyn hugs Prithvi to pacify him. Kritika is shocked to see their hug. Mahira signs Prithvi about Kritika. She has a plan to save them from getting caught. Preeta asks Kareena to just stop the engagement.

She wants to discuss the truth with the family. Kareena is upset. She cries that Kritika can’t tolerate another heartbreak. Preeta tells that people’s opinion doesn’t matter, if Kritika suffers a heartbreak, then she will be okay after some time, but her life can’t get fixed if she marries a wrong guy. She asks Kareena to save Kritika from the wrong happening. She wants Kareena to just scold her if she wants to tell something. She asks Kareena to be strong and not let anything wrong happen. Kareena finds Preeta giving her strength and hugs her.

Karan finds Kareena hugging Preeta with love. He happily clicks their picture. Shrishti is also glad to see Preeta getting the deserved respect. She follows Mahira to fail her plans. Mahira wants Shrishti to not follow her. Shrishti tells that Preeta has already shown the proof to Kareena. She asks Mahira to come along with them. Mahira realizes that Preeta is exposed. Shrishti faints her down to make her away from the drama. Karan asks Kareena how did she melt her heart towards Preeta.

Kareena tells that Preeta has proved that Prithvi isn’t a right guy for Kritika. She is thankful that Shrishti has done a lot for Kritika, when she always scolded her. She apologizes to Preeta. Karan tells that even he knows the truth that Prithvi isn’t a nice guy. Kareena wants Karan to control her anger when Prithvi is exposed. Kritika doesn’t listen to Prithvi and Sherlyn, when they both try to clarify. Kareena calls Kritika to the hall to share the truth. Kritika asks him to come downstairs for the family discussion.

Prithvi tells Sherlyn that he will be going to jail now. He feels ruined. He loses hope. The family gathers for the huge drama. Shrishti tells that Kareena is going to make a big revelation in front of the family. Prithvi tries to know the matter from Kareena. Kareena asks Prithvi to admit the truth in front of the entire family if he wants to not lose the final chance. Prithvi refuses to accept the truth. Sherlyn hopes Prithvi remembers his advice.

Kritika tells Sherlyn that she should ask Prithvi. She confronts him about hugging Sherlyn. Kareena tells that even he has seen Prithvi hugging Sherlyn. Rishabh is shocked to know it. He asks Kareena what is she saying. Kareena tells them that she had seen Prithvi and Sherlyn hugging behind the locked door in the bedroom. Rishabh tells that they can be friends and have a hug. Karan tells Rishabh that everything will be proved.

Shrishti tells that Prithvi had hugged Sherlyn twice and was spotted by Kritika as well. She asks Kareena to bring out the truth. Kritika changes her side and shows her trust on her husband. She tells him that she isn’t upset with Prithvi, who doesn’t share anything with her, but Sherlyn. She adds that Prithvi was taking advice from Sherlyn. She believes Prithvi. She asks the family not to be narrow-minded. She is glad that Rishabh is sensible, and doesn’t have a narrow thinking. Prithvi finds Kritika really sweet.

Karan asks Kritika to shut up and let them talk. Shrishti wants to get Sarla and Janki to expose Prithvi’s true colours. Karan asks Sameer to get the projector. Karan hurts Prithvi. Kritika cries out that she will not tolerate anything against her husband. She demands respect for Prithvi. Preeta asks Kritika to do as she wants, being Prithvi’s second wife. She reveals that Prithvi is already married.

She presents Prithvi’s marriage pictures on the projector. She questions Prithvi about his marriage. She asks about his wife. Rakhi blasts her anger on Prithvi. The entire family loses faith on Prithvi. They threaten to call the police to get him arrested. Bravo for Preeta and Shrishti for their bold steps. Comment your views and keep reading to know if this will be the end of Prithvi’s chapter.

Reviewed Rating for Kundali Bhagya 16th March 2021 Written Update Preeta wins: 5/5 This rating is solely based on the opinion of the writer. You may post your own take on the show in the comment section below.