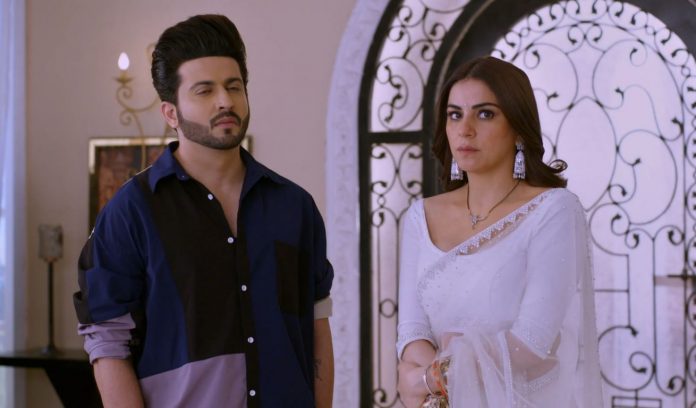 Kundali Bhagya New murder mystery 29th March 2021 Written Update ACP Vijay meets Luthra family. The staff praises him to be a hero in his own life. They know that ACP doesn’t like to spare rich culprits, the status and richness don’t help any culprit. The entire family meet ACP Vijay. Bani tells Vijay about Bani’s injury. Karan asks ACP the reason for coming. Kareena tells that ACP Vijay had helped Mahesh in a land case before. Karan tells that ACP doesn’t look much friendship at this time. ACP informs them about Akshay’s murder.

This shocks the entire family. A murder mystery begins. Preeta had last met Akshay in the hotel room. She is worried since she didn’t murder him. He wants to investigate if any of the Luthra family murdered Akshay. Karan tells that nobody from his family can kill anyone. ACP doesn’t want to arrest anyone if they are innocent. They want to know if anyone met Akshay recently. Mahira suspects Karan who had beaten up someone at the hotel for Kritika’s sake.

She wonders if Karan has killed Akshay. Prithvi, Kritika and Preeta also met him. They are worried that they would get caught. Kareena tells them that they aren’t in touch with Akshay, who left Kritika in the mandap. ACP tells that their humiliation can be a reason for the murder. He suspects Kritika. He questions her on finding her nervous. He tells them that she was in touch with Akshay till now, her family isn’t aware of it. Kareena asks ACP to talk to Kritika well. She claims that Kritika has moved on in her life, she is marrying Prithvi.

She gets a clean chit for her daughter. Rakhi and Kareena love Kritika. ACP tells them that mother can’t suspect a daughter, even if the latter kills someone. He knows that Kritika’s fear is proving her innocence, if she had killed someone, then she would have told anyone in the family. He tells that Kritika didn’t do the murder. Prithvi is tensed since he had given 30 lakhs to Akshay and can easily get exposed in front of Luthra family. He drops the tea by mistake due to nervousness. He apologizes to ACP. Rakhi asks Girish to get the floor cleaned.

ACP interrogates Prithvi seeing him terrified. He asks Prithvi why isn’t he happy that he is getting married to Kritika. He congratulates Prithvi. He wants to know it from Preeta why she disliked Akshay. Preeta tells that Akshay was cheating Kritika. ACP knows everything. He asks Preeta to answer his questions. Karan tells that they had a problem with the marriage, not Akshay. ACP tells that Preeta is well-educated, she can answer him honestly to help the law. Preeta tells that Akshay has never contacted Kritika ever after the marriage. ACP suspects Preeta and Karan as well. ACP tells them that he has got his answers, he knows who killed Akshay.

He promises to inform them about the culprit once he finds the truth. He makes a leave, while the family sinks in tension. Suresh tells them that ACP will do his work, they shouldn’t worry when they are innocent. Kritika recalls the way Akshay has blackmailed her. She cries for Akshay’s death. Preeta knows that the matter is shocking when they met Akshay the same day. Kritika fears that she will get caught.

Preeta tells that they had nothing to do with Akshay, now there is no evidences against Kritika. Prithvi tells Sherlyn that he had gone to meet Akshay on her word. He adds that Akshay was alive after he met him. Mahira overhears their conversation. Sherlyn asks him if he killed Akshay. She wants to know the truth. She suspects Prithvi, while Mahira suspects that Karan killed Akshay. Who has killed Akshay? What do you think, who is the murderer this time? Comment below and keep reading.

Reviewed Rating for Kundali Bhagya New murder mystery 29th March 2021 Written Update: 3/5 This rating is solely based on the opinion of the writer. You may post your own take on the show in the comment section below.