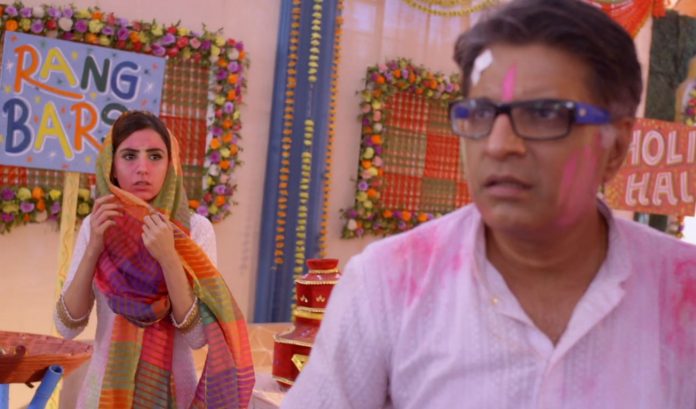 Kundali Bhagya 5th April 2021 Written Update Mahesh finale Preeta and Shrishti find Prithvi unconscious. They try to help him. Mahesh joins the family and brings some fun moments after a long time. The family celebrates holi with Mahesh, just like the good old times. Rakhi can’t believe that her husband is finally back. Mahira colours her face. She is sure that nobody will recognize her. She gets an injection for Mahesh. She wishes Sherlyn handles Prithvi. Sherlyn stops at the door seeing Preeta with Prithvi. Kareena also wishes Mahesh.

Mahira waits for the family to get busy in dance. Sherlyn wants Prithvi to know the games of Luthra family. Sherlyn messages Mahira about Prithvi’s condition. She doesn’t want Prithvi to admit any truth. She wants Mahira to just kill Mahesh. Mahira feels she should take an advantage of the crowd. Sherlyn keeps an eye on Prithvi. Kareena asks Mahesh to dance with the family. Mahira finds them smiling. She wants their laugh to become the last. Preeta tries to talk to Prithvi. Sherlyn doesn’t want him to react.

Other side, Karan meets Preeta and learns that Prithvi is confessing his crimes. Shrishti tells Karan that Prithvi is just giving them hints. Karan tells that Mahesh is calling them downstairs. Shrishti tells that she will talk to Prithvi and get some details more. Karan gets silly to miss such a good chance and takes the situation lightly. He asks them to leave Prithvi and focus on spending time with Mahesh. Preeta and Shrishti want to get the truth out from Prithvi, but Karan hinders them. Karan tells that Mahesh is calling everyone for a family dance.

Sherlyn is relieved that at least Karan and Preeta left. The family enjoys a holi dance with Mahesh. Mahira reaches close to Mahesh to inject the poison. Sherlyn stays close to Prithvi to help him on getting a chance. Shristi asks Preeta to come with her, since just she can get the truth out of Prithvi. Mahira loses the injection because of Shrishti. She sees her plan failing. Karan finds Preeta gone. Mahesh goes to drink water. He is shell shocked to see Pawan in the holi party. Mahesh also spots Pawan. She wonders if Mahesh knows Pawan as well.

Shrishti asks Preeta to just talk to Prithvi. Karan also thinks he should speak to Prithvi. He tells that Prithvi will react on his voice as well. He tries waking up Prithvi. Sherlyn is tensed that Preeta and Karan came back. Preeta makes Prithvi answer her. She asks the same question in front of Karan. Karan also wants to know the reason for Prithvi’s enmity. Sherlyn prays that he gets silent. Sherlyn recalls the past when Mahesh had overheard Prithvi and her revenge plans.

Sherlyn regrets that Rishabh had married her and ruined her life. She feels she would have married Prithvi and stayed happily ever after with him if Rishabh didn’t come in her life. She curses Rishabh and the Luthras who are the reason for ruining Prithvi’s family.

She knows Prithvi’s reason for revenge on Luthras. She feels Luthras will win once again. She wants to change her fate by winning this time. She decides to burn the house and kill all of them. Mahesh recognizes Pawan. Pawan asks him for Prithvi. Mahesh grows angered. He alerts the family against Pawan, Prithvi, Mahira and Sherlyn, who had tried to kill him. The Luthras are shocking to know about an assassin’s entry in the house.

It will be a finale twist for Mahesh or the evil gang. Who will win this time? Will the evil gang kill Mahesh or this time it happens the other way? The show is bringing high intense drama in the coming week. What do you think? Comment your views on Pawan’s entry. Keep reading.

Reviewed Rating for Kundali Bhagya 5th April 2021 Written Update Mahesh finale: 5/5 This rating is solely based on the opinion of the writer. You may post your own take on the show in the comment section below.